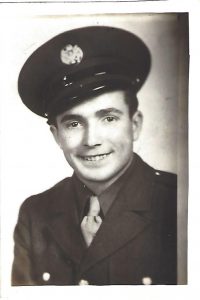 Ralph “Duane” Collings was born November 11, 1924, in Parke County and would have been 94 this Veterans Day. He graduated from Mecca High School (Parke County) in 1942.  Duane met Pauline Gooding, his bride-to-be, at Turkey Run State Park where both were working before he enlisted in the Armed Services. They would later be married May 21, 1944 at Sioux Falls, South Dakota in a Justice of the Peace ceremony, on a weekend pass. He was preceded in death by his wife of 69 ½ years, Pauline (Gooding) Collings December 27, 2013; his parents, Boyd and Fannie Hadley Collins; his two brothers, Winston and Rupert; his sister, Eloise Lientz Thomas; and his brother-in-law, Robert Gooding, December 29, 2017.

Visitation will be held from 2 to 4 p.m. Sunday, October 28 at Servies & Morgan Funeral Home, 102 East Washington Street, Roachdale, IN 46172. Graveside service will be held at 11 a.m., Saturday, November 3 at Roachdale Cemetery, with Pastor Alan Hughes officiating. Contributions in memory of Duane Collings may be made to VFW Post 3284, P.O. Box 68, Roachdale, IN 46172. You are invited to visit www.serviesmorgan.com where you may share an online condolence with the family. Servies & Morgan Funeral Home has been entrusted with the funeral arrangements.