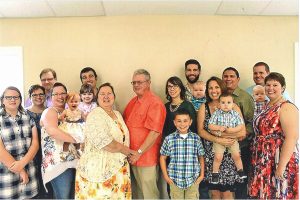 Join in celebrating the 25th anniversary of Nuts and Such. It’s owned by Tom and Kathy Knapke of Parke County, and run by the entire family, including five daughters, five son-in-laws, and grandchildren as they get older, each with their own little jobs to do. As they reflect on the time they have spent running their business, they want people in the community to know that they consider it an honor and a privilege to work with their family and cherish the many memories they have made with the individuals that have purchased their delicious nuts.

Their story began with a massive amount of research into the opportunity to roast nuts as a fundraiser for the music boosters. Not only would they have to purchase the nuts, ingredients for the recipe and packaging materials, but they would have to have the roaster shipped directly from Germany. With the cost of the machine being $6,000 ($8,000 shipped) the Boosters came to the decision that it was more than they could afford and voted to pass.

For some time, the Knapkes toyed with the idea of doing it on their own but were unsure of how they would come up with the funds to invest in this opportunity. It wasn’t until their oldest daughter was a senior and facing the debts of college, they decided to take a leap of faith and go for it. They took out what they could of Tom’s retirement and it still wasn’t enough to cover everything they needed. But little did they know, the people of Parke County and the Albanese Company (the company they wanted to purchase their nuts from) believed in what they were doing and offered to help. They were issued a 90-day note through Fifth Third Bank and were allowed to buy the nuts themselves on credit.

Ecstatic, they made their first batch right away using the recipe that came with the roaster. After discovering it was too bitter, they researched the market to find just the right one for going forward. With the help of their daughters, they made several batches which they put into Prairie Farms buckets, sending the nuts to the high school for taste testing. Each bucket had information the testers needed for the batch along with a comment sheet. Each vote from a teacher, counted as two points and from each student was one point. This method led to the winning batch.

Having all they needed to get up and running, they were ready to debut their products. Knapkes chose the Parke County Covered Bridge Festival to do so.  Hoping to clear the note and pay for the nuts, the Knapkes sold out the first couple days, leaving them to travel back and forth to Sam’s Club to get more nuts every couple days in order to finish out the festival. From then on, they have had to adjust as they go. “One time, Dr. Dwyer and his wife made a trip and came back with 400 pounds of nuts for us,” said Kathy. Over time, they have increased their production from an initial order of 500 pounds to three quarters of a ton of nuts each year. Tom roasts each batch of nuts two and one half pounds at a time. It takes 10 to 15 minutes. “It’s safe to say that the roaster and I have gotten very close over the years,” he added. Knapkes estimate, to date they have roasted and sold over 19 tons of nuts.

Over the years the Knapkes have been able to use their business and the support of the community to sell nuts at football games raising money for the band, involve local children and passing on the skills it takes to run a business, put all five of their daughters through college not just for their bachelor’s degrees but also their masters, pay for five weddings and get the quality time with their family that is so important to them. Because of all of this, they would like to encourage anyone in the community to take a hobby and turn it into something big that their families can cherish as much as they have. They cannot stress enough, the impact this has had on their family and would love to see others get the same opportunity.

“Nuts and Such” is under the red and white tent on the west side of the square ready to greet the community and returning friends made over the years with the sweet smell of freshly roasted nuts. It is here you will find cinnamon pecans and almonds along with roasted and salted cashews. But that’s not all you will find at their booth. The “such” part of Nuts and Such includes hand painted gourds and glass angel ornaments as well. All made with the same love and passion that is put into the rest of the business.

In addition to their presence at the Festival each year, you can purchase their nuts year-round at Neva’s Antiques, Turkey Run Inn and by calling (765) 569-6135. Knapkes can provide a gift or favors for Valentine’s Day, baby showers, weddings and other special events.