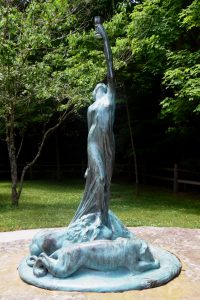 Juliet Virginia Strauss was an American Journalist and public speaker from Rockville. She is best known for leading the efforts to save Bloomingdale Glen (now Turkey Run) from being destroyed by logging companies in the early 1910s.

From a young age, she had been determined to break into the world of journalism; Strauss began her career as a weekly columnist for the “Rockville Tribune” in 1893. Soon after she began writing for the Tribune, she married her husband, Isaac, who was co-owner of the paper at the time and began working as associate editor. Her column was titled “Squibs and Sayings,” and her writing ranged wildly from commentary of magazines to musings about married life. In 1903, Strauss began working for the “Indianapolis News”; she focused on stressing the importance of a supportive home life and the joys of living in rural and small-town areas. She began writing for the “Ladies’ Home Journal” monthly in 1905. Her work here gained her national attention as a writer. Finally, she also published a book of her work in 1906 titled The Ideas of a Plain County Woman.