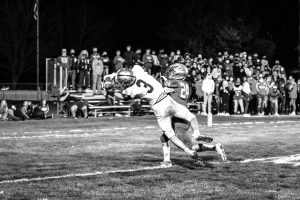 HAULS IN THE CATCH. Senior Riley Ferguson makes a sensational catch for a touchdown during Friday night’s sectional championship game at South Putnam. The Wolves suffered a heartbreaking loss to the Eagles with a final score of 43-40. (Photo by Grace Johnston)
The Parke Heritage Wolves led most of Friday night’s football Sectional championship game at South Putnam, but the sixth-ranked Eagles rallied for 29 points in the final 14 minutes of the game to pull out a three-point win.

Boys’ Basketball Season Off To A Sputter; Girls’ Stall

Sprint To The Finish