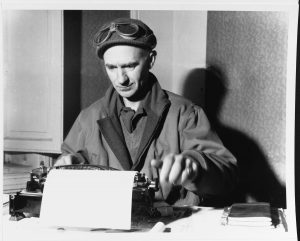 Today, September 2, marks the 75th anniversary of the formal surrender of Japan and the official end of World War II. The Hoosier State Press Association and the Ernie Pyle World War II Museum in Dana has offered some of Ernie’s best columns for re-publication to mark the anniversary, including this one, The Death of Captain Waskow, declared the best column ever written by the National Society of Newspaper Columnists.

The Ernie Pyle World War II Museum features the famous journalist’s birthplace and a museum dedicated to Pyle’s life and writings as a war correspondent. It is owned by the Friends of Ernie Pyle, who are dedicated to preserving and expanding the legacy of the writer whose columns linked the soldiers on the front line to worried families on the home front. To preserve Ernie Pyle’s memory is to preserve the sacrifices made by what has been dubbed “The Greatest Generation.” To learn more about the Ernie Pyle World War II Museum located in Dana, Indiana, or make a donation to assist the efforts of the Friends of Ernie Pyle to honor him and that generation, go to www.erniepyle.org.

The son of tenant farming parents in west-central Indiana, Ernie Pyle became history’s greatest war correspondent. When Pyle was killed by a Japanese machine gun bullet on the tiny Pacific island of Ie Shima in 1945, his columns were being delivered to more than 14 million homes according to his New York Times obituary.