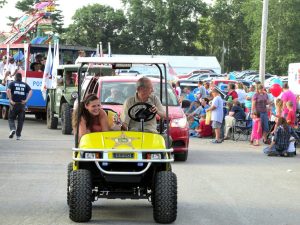 Parke County has a long tradition of county fairs, including the events held at Rockville before the modern era of this county’s fairs began in 1921. The old fairgrounds were located west of town, near the location of the present Christian Church. A Rockville Republican contributor recalled the “old days” in a letter in 1934.

“Two of the institutions when I was a lad were the Parke County fair and the Bridgeton fair. So many people attended the former and stayed over for the shows at the Rockville Opera House that the best of attractions were offered. Such renowned personages as Minnie Maddern (Fisk) and DeWolf Hopper were among those whom we had the privilege of seeing. It was one of our pleasures, next to carrying water for the elephants, to help hold down the balloon while it was being filled for ascension at the fair.