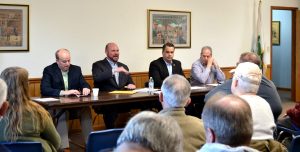 LEGISLATIVE CRACKER BARREL. State Senator Phil Boots along with State Representatives Alan Morrison and Beau Baird attended last weekend’s Legislative Cracker Barrel, where they gave updates to the nearly 40 Parke County residents who attended. They touched on the bills that they have supported this past year, bills that they hope to move through committee coming up and bills which they voted against. Following the formal session, the three listened to the concerns and answered questions voiced by their constituents. Pictured are: (from left) Mediator, Chadd Jenkins; State Representative Alan Morrison; State Representative Beau Baird; and State Senator Phil Boots. (Sentinel photo by Christina Gray)