Rossville scored early and Riverton Parke scored late, but the Hornets held on to defeat the Panthers 4-3 in the IHSAA Class A Regional 14 action Saturday.
The Class A #2 ranked Rossville Hornets came out stinging in the first inning, racking up four runs on five singles to take an early 4-0 lead.
Riverton Parke starting pitcher Garrett Lawson would settle in after the rough first inning, not allowing another hit over the next three. Fellow Panther Logan Harrison relieved him in the fifth, tossing two scoreless innings while allowing only a triple in the fifth.
The Panther offense managed only one hit through the first five innings against three different Rossville pitchers. Riverton Parke got a leadoff single in the second by Harrison and two walks in the third but could not score in either inning.
Riverton Parke finally got on the scoreboard in the sixth inning. B.J. Hopton led off the inning with a walk, advanced to second on a wild pitch and moved to third on a fly-out. After another fly out that failed to score the run, Harrison walked and Spencer Rickard pinch ran. Triston Herrick doubled to the left center gap and plated both runners to cut the deficit in half at 4-2.
In their final at-bat in the seventh, the Panthers got a leadoff double from Hunter Collings and a single by Michael Truax to put runners on the corners with no outs. Keaton Allen executed a sacrifice bunt that allowed Collings to score and moved the tying run to second base. A wild pitch allowed Truax to move to third with still only one out. The Hornets brought in their fourth pitcher of the game and he struck out the next two hitters to end the game.
Riverton Parke finished its season with a record of 19-11. 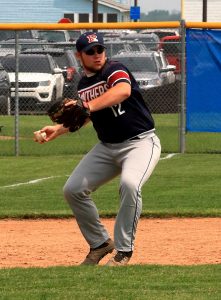 ON THE DOUBLE. Riverton Parke third baseman Triston Herrick throws to first base to complete a double play in the Panthers’ Regional game Saturday. (photo submitted) 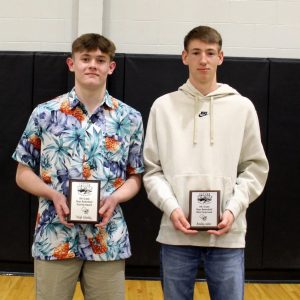 First Ever Event For Young Wrestlers