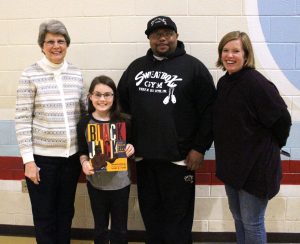 PRO BOXER SPEAKS TO STUDENTS. “You will have success when you do your best.” was the message presented by James Porter to students at Rockville Elementary and Turkey Run Elementary. Porter, a former professional boxer and owner of Sweatbox Gym in Terre Haute, spoke to the students about boxing and the story of Jack Johnson. Johnson was the first African American world heavyweight boxing champion. As a boxer in the early 1900s, Johnson had to overcome many stereotypes to prove that the color of your skin doesn’t matter and that every man can succeed. He came from a poor family and his parents were slaves, but that didn’t stop Johnson from proving to people that he could be the best. During their library classes, the students heard the story of “Black Jack: The Story of Jack Johnson” to help them prepare for the presentation. “If you want something you’ve got to believe in yourself,” said Porter. “Jack Johnson didn’t let the way people treated him keep him from believing in himself and doing his best.” During the presentation, Porter led the students on several listening and following directions activities as well as some exercise movements. He encouraged students to surround themselves with a circle of friends, to be champion listeners and to never put their hands on anybody. To conclude his talk, he had the students and staff gather together to make a vow to “Never Give Up!” The presentation was a part of the Big Read program that is sponsored by the Vigo County and Parke County Public Libraries. Pictured are (from left) JeanAnn Craycraft, Parke County Public Library; Carleigh Craycraft, Turkey Run Elementary third grade student; James Porter and Wende Personette, Sweatbox Gym. (photo submitted) 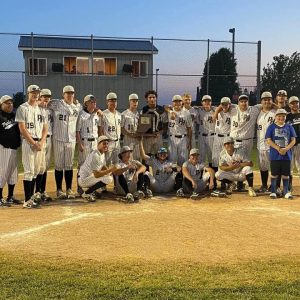 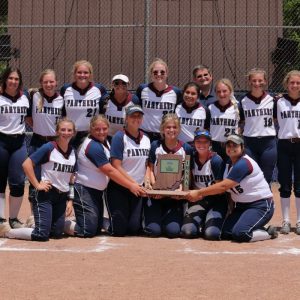