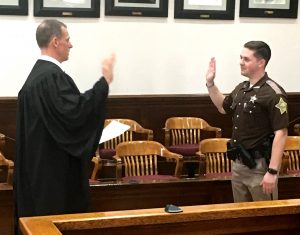 NEW DEPUTY TAKES OATH. Darian Lewellen, 21, was hired as a Deputy by the Parke County Sheriff’s Office March 14 and was administered the oath of office by Parke Circuit Court Judge Sam Swaim. Lewellen is a graduate of IUPUI and has a Bachelor of Science Degree in criminal justice and received an Indiana Sheriff’s Association Scholarship. Previously, he was a reserve officer for the Covington Police Department and also the Thorntown Marshall and part-time jail officer for the Fountain County Sheriff’s  Office. He also completed internships with the Indiana State Police and the Indiana Department of Corrections. Lewellen currently resides in Rockville and will attend the Indiana Law Enforcement Academy later this year. Lewellen filled the position of former Deputy Goeffrey Canfield, who left the department for employment in another field. Sheriff Justin Cole said the department is excited for Deputy Lewellen to complete his training and begin his patrol duties. (photo submitted)