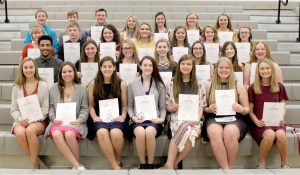 Twenty-eight students were inducted as new members. They were selected based upon scholarship, service, leadership and character. These areas are the basis for all National Honor Society selections.

Following the induction service, the members traveled to the Beef House in Covington for lunch. Jennifer Pakiz and Jane McMullen have served as sponsors.